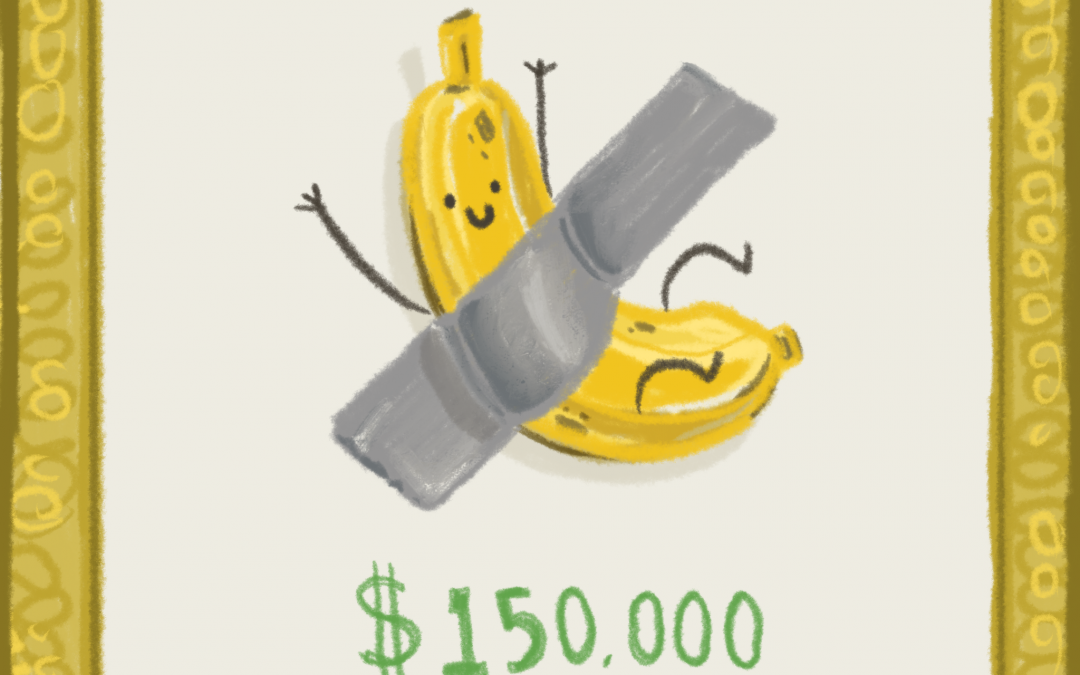 002: In this episode of storytime, we tackle the question of Contemporary art. Is it a joke? Or real art? And we’ll be using the example of an artwork named Comedian

Before we begin, let’s look at the definition of this type of art. Google defines contemporary art as the art of today, it’s the art that’s produced in the 2nd half of the 20th century and uses dynamic and conceptual methods and ideas.

“Comedian” is also known as “The $150,000 Banana” It’s a real banana attached to the wall with a standard silver duct tape by an Italian artist named Maurizio Cattelan.

“Comedian” was exhibited at the 2019 Art Basel Miami Beach Art Fair. The fair is held annually in Miami since 2002. Galleries around the world apply online through the Art Basel Miami Beach website to have the privilege of paying for space to display their art pieces at the convention. For five consecutive days in early December, every year and for a minimum of $50 a ticket the convention attracts an average of 81,000 visitors. Some attend to buy, others to look at the art, while others to just witness the fair’s fascinating sociological phenomenon.

The point of mentioning all this information about the fair is to show you that “Comedian” was just one very small work of art in a large, loud, crowded convention filled with thousands of artworks.

After the doors opened for the art fair, it didn’t take long for the banana to attract attention AND buyers.

Galerie Perrotin which is the gallery exhibiting “Comedian” was offering 3 editions of the work for $120,000 each. The first two sold very quickly so the dealer decided to raise the price to $150,000 for the last one (which also sold). There were an additional two “Artis’s proof” that were also sold to museums by the ends of the fair for $150,000 each. Which brings the total to $690,000

More than a half-million dollars for five bananas that are typically sold for 0.58 cents in the US.

Before we get to the conceptual part of the story, Let me explain the concept of “Artist’s proof”

Artist’s proof is the small number of prints in a limited edition that an artist hangs on to form their own collection or sells later on to someone important. These proofs are often regarded as special and can sell for more than the original edition even though they are technically the exact same.

So going back to “Comedian” the whole idea of selling proofs of the artwork is very funny because it’s a conceptual artwork. Basically, the buyers did not purchase actual bananas and duct tape, they paid $120,000 or $150,000 for the idea.  All they got was a certificate of authenticity that proves it is a verified artwork by Maurizio Cattelan that came with instructions on how to install it.

This brings us to the question:

Can anyone who wants, buy a banana from the grocery store and tape it to the wall in the exact same way?

There are many examples of this kind of thing in the history of conceptual art. This idea allows museums to own, exhibit, and recreate the work because each certificate came with detailed diagrams and instructions for how they are installed. This kind of thing makes sense for let’s say paintings drawn on walls or art installations, but when it comes to “Comedian” the whole idea is crazy and hilarious because the artist chose one of the most common, easily accessible, and affordable of objects and turned nothing into something of value ($690,000 to be specific).

Which brings us to, what is it the idea that they bought exactly?

Cattelan is known for pulling art pranks in the art world. He made a solid gold fully functional toilet titled “America” in 2016 that was actually being used in a bathroom at the Guggenheim in New York before it was stolen when it was lent to a museum in London. Nothing is sacred for Cattelan, he made a sculpture of Pope John Paul II being struck by a meteorite to show that even the holiest man is not safe from misfortune. He also made a miniature sculpture of a baby Hitler kneeling in repentance and being forgiven for his sins.

Looking at his bodywork, the banana is considered inoffensive in comparison. Yet, it still follows his tradition of exploiting and exposing the things people love, hate, and hold near and dear to their hearts.

The message behind “Comedian”

For people – It makes fun of the desire for art to be unique, original, or something we can’t recreate ourselves.

For art buyers – it makes fun of their susceptibility to hype name recognition and the idea of scarcity.

Going back to the fair, lines formed quickly of people wanting to see and take selfies with “Comedian”. Things were ok for a bit until this one guy (artist David Datuna) one of the visitors of the fair decided to remove the banana from the wall and eat it. He explained saying that he was performing his own work titled “Hungry Artist”. It was fine because the banana was replaced and because that guy didn’t eat the artwork, to do that he would have to eat the certificate of authenticity.

However, “Comedian” was taken down by the fair organizers before the end of the fair though, because the crowds it attracted caused a safety hazard. This brings us to an interesting point in this story. The art fair itself and its interesting role in this.

At the beginning of the fair, they posted a picture of “Comedian” and explained Cattelan’s work by saying “A wry commentary on society, power, and authority” as well as “insight into how we assign worth and what kind of objects we value”

Which is all fine and you can accept that or not BUT the good stuff comes with their post about taking it down, they said “Comedian with its simple composition ultimately offered a complex reflection of ourselves. We would like to warmly thank all those who participated in this memorable adventure as well as our colleagues. We sincerely apologize to the visitors of the fair who today will not be able to participate in Comedian”

Yes, that’s right! They actually said “Participate”, because the artwork isn’t just the banana or even the certificate. It’s all of us! Those who flocked to see it, our response to it, the memes, the press, all of it!

Teddy L Wang commented saying that “The outrage is the art” and the outrage around the art makes it more valuable because it makes it more famous and fame is a proxy of value.  So when David ate the banana and called it “Hungry Artist” he might have intended it as a critique but all it did is increase the value of “Comedian”.

Us talking about it now gives this work its power and devalues the hard work others do to actually create their art. “Comedian” adds fuel to the fire of those who already hate modern art or think that art is a con game or even used for money laundering. In the grand scheme of things, we are more unsure than ever of what art is supposed to mean, be, or do…

So why is it a shock that a mere idea can be worth $150,000 if the idea itself brings social capital that turns into capital capital? Most people’s issue with “Comedian” is that it shows how superficial people are in a superficial way.

A Person commented saying “It’s not that art we want, but it’s the art we deserve.”

Some comments about the topic that were too funny not to include: